The 2023 Alaska Health Summit can be attended online or in person. The in-person venue will be Marriott Anchorage Downtown located at 820 W 7th Ave, Anchorage, AK 99501.

If you have any questions regarding the event, please contact:
Monica Lee, Conference Coordinator

If you have questions about the theme, please contact:
Tim Hinterberger, Committee Chair

To learn more and submit your abstract, click on the “SUBMIT ABSTRACT” button below.

We look forward to receiving your abstracts!

CALL FOR BOARD NOMINATIONS

Do you want to help advance ALPHA’s mission to engage all Alaskans in public health? Service on the Board of Directors or as President-Elect is an excellent opportunity to become a public health leader in the state.

Submissions should be received by TUESDAY, NOVEMBER 15, 2022

A key function of the Alaska Public Health Association is to promote appropriate legislation. We are pleased to report that eleven of the bills we supported in the 2021-2022 legislative session passed (two of those bills were rolled into one in the last hours of the session), and the governor signed all but one of those bills into law. More details are available in our 2021-2022 Legislative Success Report.

ALPHA’s resolution process builds the foundation for our policy agenda. The ALPHA Policy Committee accepts proposed resolutions from members every year for their review and approval by the membership at the annual meeting. We are currently soliciting resolutions for the January 2023 meeting. Please find attached the instructions, timeline, and format.

Proposed resolutions are due to ALPHA by WEDNESDAY, NOVEMBER 23, 2022.

The Awards Committee of the Alaska Public Health Association requests nominations
for awards to be given at the Alaska Health Summit on January 24-26, 2023.

ALPHA awards provide an opportunity to recognize your colleagues and acknowledge
their contribution to the Alaska Public Health Association and to public health in
Alaska.

To submit your nomination, please complete the attached form by
THURSDAY, DECEMBER 15, 2022

Location: You can attend in-person at the Cuddy Center on the UAA campus, or participate fully online, or some of both!

To submit your abstract, please complete THIS form by FRIDAY NOVEMBER 4, 2022.

The Summit theme will be ‘Public Health 3.0’ which is described as ‘a framework for renewing the US approach to governmental public health comprising five critical dimensions: (1) strong leadership and workforce; (2) strategic partnerships; (3) flexible and sustained funding; (4) timely and locally relevant data, metrics, and analytics; and (5) foundational infrastructure.

We look forward to receiving your abstracts!

The Health Professions Student Organization (HPSO) from UAA and ALPHA got together on April 5 for a little exercise and networking at Goose Lake in Anchorage. 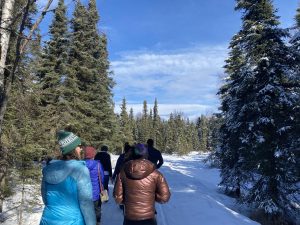 Thanks to ALPHA members Travis Hedwig, Lisa Schwarzburg, and Kristin Bogue for organizing!

by Tim Hinterberger, ALPHA past president

The 2022 Alaska Health Summit is now history, and those of us involved in planning and running it have had a week to relax and reflect.

The Summit theme “The Intersection of Public Health and Public Safety” clearly resonated, being referenced by a number of speakers in their presentations. It’s the intersection where many of Alaska’s public health professionals work, every day, so we knew it would be a popular topic. But it’s not often explicitly acknowledged that the boundary between those two professional areas can be blurred.

That’s why we took the unusual step of inviting leaders of three of Alaska’s law enforcement agencies, the Anchorage and Juneau police departments and the state troopers, to join a panel discussion. Captain Asselin, Chief Mercer and Colonel Barlow offered their views on the public safety aspects of their agencies’ missions and even followed up by email with responses to Summit attendees’ questions that there wasn’t time for live.

In response to the question, “How are Alaska police departments and the troopers actively demilitarizing? What is the long-term intention in armament and hiring of former military personnel?” Captain Asselin wrote, “The Anchorage Police Department has progressive policies to identify and limit which tools we can use under certain extraordinary circumstances…[to] guard against the traditional view of the ‘militarization’ of the APD.  We will continue to evaluate and balance the need for our officers to be properly equipped to safely respond to the most dangerous and challenging circumstances.”

He added, “In terms of hiring of former military personnel, we are honored that so many citizens chose to come to APD to continue their life of public service.  Our laws, training and policies prevent traditional military tactics and tools from being used in police situations.”

Juneau’s Chief Mercer also replied, in part, “JPD also has very defined practices in place that limit the use of special equipment.  We recognize public perception is equally important in how local law enforcement is viewed.” Regarding personnel he stated, “Veterans do not receive specialized treatment and must pass the entire hiring process like any other applicant… JPD currently has 12 officers who are veterans, from all branches of the US military.  We are proud of their service and desire to continue to serve the public as police officers.”

Colonel Barlow responded at some length, including to say, “All state troopers, regardless of their background, must operate within the confines of the policies, procedures, training, and authorized equipment recognized by the Department of Public Safety… The Department recognizes and has benefited from the experience and perspective former military members bring.  The varied backgrounds and experiences of DPS employees significantly enriches the Department’s capability to conduct the public safety mission.”

ALPHA is pleased that the Summit could be a forum for frank exchange of views on these issues that are clearly important to our members. We don’t often have opportunities to pose such pointed questions to our public safety officials, and to get them answered.

If you appreciate the dialog on public health/public safety that this Summit enabled, we hope you will continue to support ALPHA and urge your friends and co-workers to as well. Your engagement with ALPHA, perhaps even by serving on a committee or helping to plan the next Summit, will allow us to grow and let us do more to serve the community.

Thank you for another successful Alaska Health Summit

The Intersection of Public Health and Public Safety

You may have see the Nov. 3, 2021, commentary in the Anchorage Daily News with the same title as this blog post. It’s by Pat Dougherty, a former editor of the paper. I’ve had the same concerns for a while, but he beat me to the punch in getting his thoughts into print. Here’s some of what he said:

“On Oct. 14, leaders of the Alaska Chapter of the American Academy of Pediatrics took the unusual step of writing a public letter rebutting and condemning the public comments of Dr. Michael Savitt, a pediatrician who is the chief medical officer of the Anchorage health department. That was extraordinary because doctors are loath to publicly criticize other doctors. I know still other doctors in the community are privately expressing their distress and asking each other what they can do to curb such medical misconduct.

“I am a layman and in no way an expert on medical ethics, but I can read the American Medical Association’s Code of Ethics, which the medical board has adopted to apply to doctors in Alaska. I have seen the conduct of some Alaska doctors clearly violate that code of ethics, and I have filed formal complaints with the medical board, which has a responsibility to see that the code is upheld.”

Mr. Dougherty goes on to urge all Alaskans who agree with him to write to the Alaska State Medical Board and tell its members that Alaskans want clear guidelines that prevent doctors from dispensing distorted, misleading and outright false medical information to advance their personal political agendas. Within minutes of reading his appeal, I was at work writing the following letter that I immediately emailed to the Board.

“Dear members of the Alaska State Medical Board,

As a medical educator with more than 30 years experience, and as president of the Alaska Public Health Association, I’m writing to ask you to address the issue of Alaska-licensed physicians who publicly advocate ineffective or even harmful medical treatments for COVID-19, discourage members of the public from seeking efficacious, standard-of-care treatments, publicly attack and undermine confidence in FDA-approved vaccines, or claim that masking to prevent virus spread is harmful, all of this contrary to the best scientific research and the consensus of the country’s leading medical experts.

In medical school, we train physicians in the basic sciences and how to examine and treat patients. But we also teach them how to understand and evaluate research, and we expect them to understand that they will continue to be part of the medical academy long after they graduate and enter practice. Having received training at public expense, and having been granted medical degrees and certifications from professionally recognized programs, they are beholden to practice within the established scientific consensus.

The way the scientific medical consensus evolves is not through rogue physicians telling the public that the establishment is wrong. Rather, any physician who believes a current prevention or treatment is wrong can write a paper and send it to an academic journal. That paper will be reviewed by experts, and if they believe the author has made a reasonable argument, the paper will be published for all medical scientists to read. If enough of the recognized experts find the argument compelling, it will lead to new research that could overturn the consensus. That’s the way it works.

There are a small number of doctors in the US who question the effectiveness or safety of vaccines or who promote treatments that the medical establishment has concluded are worthless. Kaiser Health News identified about 20 doctors nationwide who have made false or misleading claims about COVID-19, on top of the “Disinformation Dozen,” a group of top superspreaders of COVID vaccine misinformation on social media named in a 2021 report by the nonprofit Center for Countering Digital Hate. Are those the doctors we should listen to, rather than the heads of the NIH Infection Disease division and the CDC? Are they heroes, bravely standing up to an unjust, dominating system? No. They’re potentially dangerous, self-serving attention seekers.

Alaska should not tolerate physicians abusing the public’s trust. They need to remember that the only reason people listen to them and respect their advice is because they went through a medical school that’s accredited by the Association of American Medical Colleges, and they completed accredited postgraduate education programs that were supported by federal Medicare funding. Now that they’re practicing, they have no authority to disregard the medical establishment that has placed them in positions of trust.

I ask the Medical Board to address this issue now, before more harm is done. The Board should publish, at its earliest opportunity, an advisory statement outlining its view of the ethical requirements of Alaska doctors with respect to the public dissemination of false, misleading or dangerous medical information, and the potential consequences of such conduct. In doing so, the Board would be warning doctors that certain kinds of behavior violate the Board’s adopted code of ethics and could lead to sanctions or reprimands or even, in the most extreme cases, license suspensions.

So now I pass the baton on to all of you who agree with Mr. Dougherty and me. Please send your thoughts to the Board at medicalboard@alaska.gov.

APHA’s Speak for Health campaign is coming up soon. It’s an opportunity for Affiliate and APHA members to advocate for public health and connect with federal legislators when they are home during August recess. We could potentially plan ALPHA activities, in addition to these ones recommended by APHA: